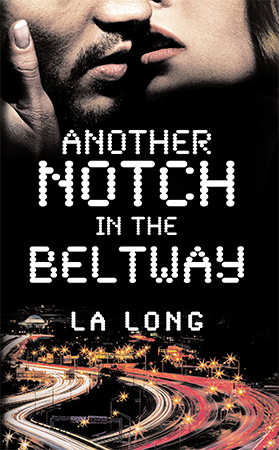 Another Notch in the Beltway

Historical romance writer, Lenore Held, AKA, LaSandra Lacy, feeling the need to step into the present century, both personally and professionally, has agreed to co-author a steamy contemporary romance with male author, MP Finnegan.

As sparks begin to fly, on and off the written page, the world around them turns into utter chaos.

Her son’s father, Senator Byron Maxwell, makes an appearance in her life after an almost 22-year absence.

Theirs was the proverbial bad clique of a Washington romance: the gentrified, conservative, womanizing statesman and the beautiful, brilliant but naive, starry eyed intern, who had the bad taste to become pregnant with his child. He pretended they didn’t exist, until now. Now he wants something from her, something that isn’t hers to give.

Add to that a media play gone horribly wrong, a stalker, home invasion, and unhinged family members of the senator’s and Lenore and MP’s life together begins to resemble a book plot. Unlike a book, the turmoil that surrounds them is real and deadly 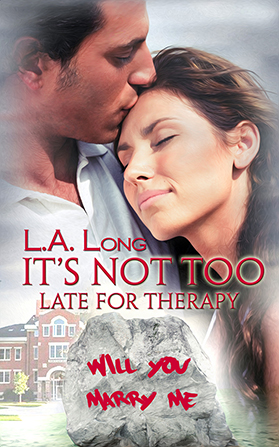 It’s Not Too Late For Therapy

It’s Not Too Late For Therapy is the not so classic story of love the second time around. Charlotte Mason is a brilliant, generous woman who is scarred by years of childhood bullying and the betrayal of two men she once loved.

For the last decade she’s raised her daughter alone after the death of her philandering husband in a one-vehicle crash, which took not only his life, but that of his lover.

Despite the challenges, Charlotte believes she’s found balance nurturing her daughter and pursuing a challenging, and sometimes heart wrenching, career as a victims’ advocate, never acknowledging that she too is a victim.

All that changes when she runs into Gregg Wyte, her first love, on a homecoming/visitation weekend to Albion College, with her daughter.

Gregg is as surprised to see Charlotte as she is to see him, but while she’s dismayed, he’s delighted. Gregg is determined to prove he’s not the selfish, indiscreet bastard he was in college. But Charlotte’s been hurt so many times by cruel words and deeds she’s doing her best to prove she’s no one’s door mat.

Then just when Gregg seems to be making inroads to her heart, a secret from her husband’s past comes to light.  As if that’s not enough, Gregg’s been hiding his own secret and when Charlotte finds out it threatens to shatter their world.

No drama. That’s what insurance executive Victoria Ashton strives for, but it eludes her at every turn. Just this morning, she foiled a snatch and grab of her laptop. Question is: was that all it was? The witness and investigating officer think otherwise.

The same evening, her on again, off again lover, Gabriel Barnes, materializes from the darkness. He announces he’s retired from the Navy SEALs, home to stay, looking for a wife, children, and the white picket fence.

Victoria’s not fooled. She knows his retirement is no such thing. While the sex is great, she isn’t going to play runner-up to his new Black Ops venture, Under Cover Angels (UCA). UCA is trying to stop the supply arms to Pakistan, human trafficking to the Middles East, and if the bad guys can get the funding, dirty bombs could be heading to the US.

Everything changes when their two worlds collide. Her insurance fraud suspect and his Russian arm’s dealer turn out to be one and the same. Victoria says coincidence. Gabriel says there are no coincidences.

When the case takes an unexpected turn, Victoria and Gabriel must join forces to stop the terrorists before it’s too late.