It’s Not Too Late For Therapy 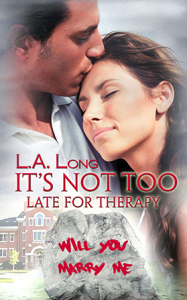 It’s Not Too Late for Therapy is the not so classic story of love the second time around. Charlotte Mason is a brilliant, generous woman who is scarred by years of childhood bullying and the betrayal of two men she once loved.

For the last decade she’s raised her daughter alone after the death of her philandering husband in a one-vehicle crash, which took not only his life, but that of his lover.

Despite the challenges, Charlotte believes she’s found balance nurturing her daughter and pursuing a challenging, and sometimes heart wrenching, career as a victims’ advocate, never acknowledging that she too is a victim.

All that changes when she runs into Gregg Wyte, her first love, on a homecoming/visitation weekend to Albion College, with her daughter.

Gregg is as surprised to see Charlotte as she is to see him, but while she’s dismayed, he’s delighted. Gregg is determined to prove he’s not the selfish, indiscreet bastard he was in college. But Charlotte’s been hurt so many times by cruel words and deeds she’s doing her best to prove she’s no one’s door mat.

Then just when Gregg seems to be making inroads to her heart, a secret from her husband’s past comes to light.  As if that’s not enough, Gregg’s been hiding his own secret and when Charlotte finds out it threatens to shatter their world.